Local Hospital Helping Others and Their Own 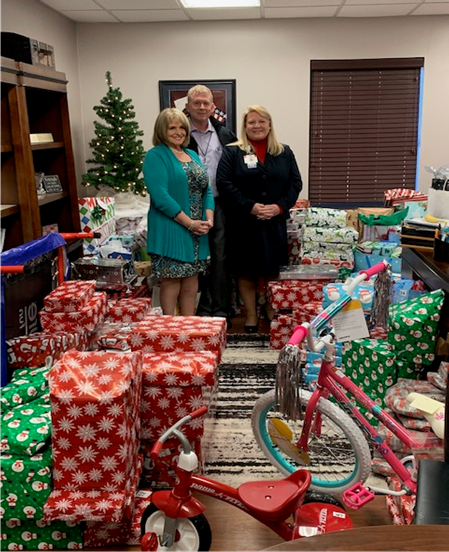 The Mesquite Police Santa Cop Toy Program is an annual event that began in 1975 with Mesquite Police Officer Reese Bullard that has since become a citywide event and community effort.

The mission and purpose of the Santa Cop Toy Program is to provide assistance during the Christmas season to disadvantaged children and families in Mesquite and the surrounding communities served by the Mesquite Independent School District.

According to School Resource Officer Mark Bradford, the 2019 Santa Cop Toy Program was able to provide gifts for over 1,200 children from over 445 families.

“We gave away over 8,000 gifts,” he said. “This was the most children the program has ever supported in one year. The success of the program would not be possible without the support of our officers, sponsors and volunteers.”

Among the sponsors is Dallas Regional Medical Center, which has supported the Santa Cop program the last few years and has contributed more than $12,000 to the program over the last three years, according to DRMC staff.

“The Santa Cop program is a phenomenal program. We sponsor a number of community programs each year, but Santa Cop is one of our favorites because we can see an immediate impact on a child’s life,” said DRMC CEO Glenda Matchett.

According to DRMC staff, after learning that some of their employees were recipients of the Santa Cop program last year they decided to take a look internally and see if they were doing all they could to help their employees with holiday needs. This resulted in DRMC setting up an Angel Tree program for staff and received 54 requests to be Angel Tree recipients.

The DRMC sprang into action and all their angels were adopted within a few days. With no angels left to adopt, employees who still wanted to help were recommended to donate to Santa Cop or another local charity.

“We received tremendous support from our hospital staff, as well as some of our doctors. We even had a few doctors take their children to go shopping for the angels so they could enjoy giving back to others. It was heartwarming to see all of the gifts being delivered to my office,” Matchett said.

Because of the response by DRMC, each angel received multiple presents; some received up to 10 or more. A total of 387 gifts were given to 54 angels.

“I felt like Santa when I was giving out all of the presents. It was a feeling I’ll never forget,” said Matchett.