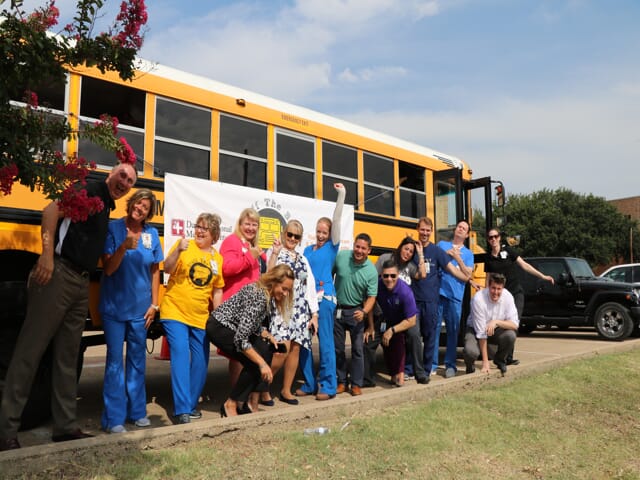 Dallas Regional Medical Center (DRMC) and Nexion Healthcare partnered up again this month to host their second annual Stuff the Bus event. The event was first started last year when the hospital realized how much of a need there was in the community for school supplies. The hospital came up with a fun idea that would also raise awareness of the need.

According to DRMC staff, more than a dozen outside groups participated this year, including local doctors and nursing facilities. They collected about 1,250 pounds of school supplies last year with a goal of 2,000 pounds this year and surpassed that by collecting over 3,000 pounds.

“This is one of our favorite events. We had T-shirts made up, created an internal competition between hospital departments, and even put up a goal thermometer in our cafe so our staff could see how we were doing,” said DRMC CEO Glenda Matchett.

“When I was reminded of how much we collected last year, I knew we could beat it,” she said. “I set a goal of 2,000 pounds, and I called it a ‘Ton of Fun’ for those in need. I had faith the hospital, our partners, and the community would help us surpass that goal, but I was just amazed by everyone’s generosity. Collecting 3,000 pounds of supplies was beyond my expectations.”

The hospital and DRMC physician group donated more than 2,100 pounds, co-sponsor Nexion, contributed about 300 pounds, and the top community donation came from the Mesquite Rotary Club with more than 150 pounds. The remaining balance was made up of donations from the other sponsors.

“I’d like to thank MISD Superintendent David Vroonland and Assistant Superintendent Angel Rivera for helping us set up this event, and for coming out the day of for support. We have a great partnership with MISD, and we’re thrilled we could help the children in our community,” Matchett said.

According to Mesquite ISD, in the 2018-19 school year, 79 percent of students took advantage of their free or reduced lunch program.

“Many thanks to the Mesquite Rotary and Dallas Regional for their efforts to make Stuff the Bus happen. That event is a prime example of our community putting People First, one of MISD’s core values. In this case, they put our students first, and I so appreciate that generous showing of care,” Vroonland said.